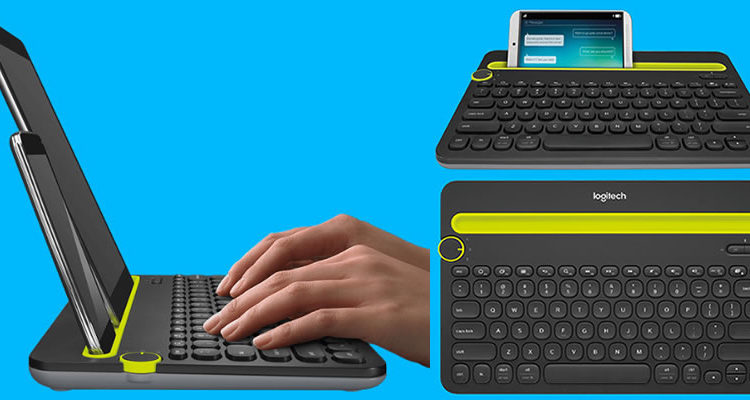 We review the top wireless keyboard that you can use with your iPhone, iPad, Fire, Android or Windows devices. The Logitech K480 Bluetooth keyboard pairs simultaneously with 3 devices, and you can change between them with a twist of a dial.

We really like the Logitech Bluetooth Multi-Device Keyboard K480 (about $30) for its integrated cradle, which is wide enough to hold a phone and a tablet at the same time.  Most smart phones, including a thin case, should sit nicely in the 0.4 inches thick by10.0 inches wide slot.

Related Article: Which is the best new iPhone – a quick guide, overview

The angle / tilt is great, reducing neck strain. Rather than having the device flat on a desk / table, or propped up with a case, placing it in the slot gives it stability while also getting it in the right position.

For example, I was able to write this article using the LogicTech with my iPhone.

This Logitech Keyboard works with all of our older devices (including an iPhone 4, iPad original, Amazon Fire, and everything else we tried) and has no problem with the newest ones.

An advantage of the K480 over other Bluetooth keyboard is how well it works with new devices, and is backwards compatible to many older devices. This was demonstrated with all the devices that have been tested with it.

It is a unique keyboard for your computer, that also works with your tablet and smartphone. I’d say it’s “Multi-Platform”,  “Cross-Platform”, “Device-Independent” and “Operating-System-Independent”. I think you get what I’m saying..

Here’s the list of Bluetooth wireless computers or mobile devices which support external keyboards (HID profile) and communicate with the K480 Keyboard:

The keyboard has a good tactile feel to it, although some people might say it’s “loud” with key press / clicks. If you are used to, or like, a traditional type of keyboard, then this will be very similar.

We like the size of the keys, as well as the inter-key spacing. We didn’t feel like our fingers were cramped on the keyboard, or that wrong adjacent-keys are accidentally pressed. Most people should enjoy the board size.

Another feature that we don’t find often on multi-purpose wireless keyboards are dual-labeled function / command keys. On the K480, you’ll find a familiar keyboard layout with shortcut keys for Windows, Mac or Chrome computers, as well as Android and iOS mobile devices.

For example, the Windows “Alt” key is also labeled for Mac “CMD”; Similarly, you’ll find a dual-label for “Start” and “Option”.

Probably one of the best features of the K480 is the “Easy-Switch” dial, to change between active devices. Other keyboards have a hard to use slider button, or push toggle. Sometimes these would stick, or be too small to readily use.

On the Logitech, just turn the Easy-Switch dial to switch typing between three connected Bluetooth wireless devices. It really is easy, and it worked seamlessly without any delay time to use the newly selected device.

We also like that the battery life is estimated at 2 years with typical daily usage. You get that from 2x AAA  batteries, which are replaceable. The first pair come factory pre-installed, which is just another thing we like about Logitech.

(FYI – when you do need new AA or AAA batteries, check out our review of the Best Alkaline Batteries)

The keyboard does have an On/Off power switch, but it will also go into a low power mode when you aren’t using it. And another nice touch is that it has a battery- life indicator-light. Many keyboards just go dead, usually when you need them most.

Overall, this is best keyboard of its type we’ve found and it’s a great value at about $30. Pick one up for your home, and a second one for your office by ordering through Amazon with: Logitech Bluetooth Multi-Device Keyboard K480 .

Your generous support by using our links for purchases is much appreciated. You may be interested in these Amazon products, or to just start shopping on Amazon - Thank You! *** ***
bluetoothfireK480keyboardkindlelogitech
Share FacebookTwitterEmailLinkedin

What Are the Different Types of CCTV Cameras?