A reliable emergency weather radio should be part of everyone’s home and auto supplies. These NOAA / Public Alert radios keep you up to date with weather and disaster alerts, so you can best plan your course of action when trouble comes along. We focus on the Midland ER210, ER310, RunningSnail and Epica in this review.

Be prepared by buying one (or more) radios before you need it, and learn how it works on a clear, calm day. We review and recommend top emergency radios to have in your home and each car, since you don’t know when or where you’ll need it.

After the reviews, we’ll explain about NOAA, Public Alerts, SAME and other emergency communications.

The Midland ER210 checks all the boxes on our must-have list for an emergency radio. You get the NOAA channels, a flash-light, 3-way powering and a USB-out charging port in a light-weight radio for under $50. 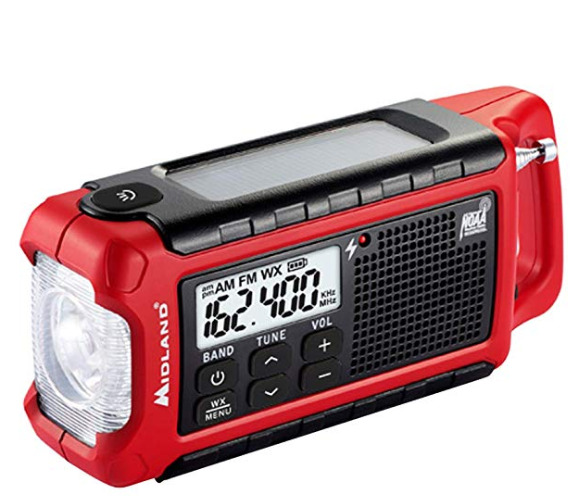 In addition to the standard AM/FM bands the ER210 receives all 10 WX NOAA channels. We like that you can have it automatically scan through all 10 available weather (WX) band channels and lock onto the strongest one. As expected for an emergency radio, when there is a NOAA Weather Alert for your area, the ER210 will sound an alarm indicating that there is a risk of severe weather. This is what we are buying one of these for, so it’s good that Midland gets this right!

Radio reception is very good, with probably the best of out of all the portable radio options.

The antenna folds neatly away into the case, and when fully extended has a swivel function. We liked this to be able to put the radio on a flat surface and move the antenna around until we got the best reception.

As important as the reception is the power. We like the ER210 for the 3-power options: about 25 hours from the 2000mAh Li-Ion battery, charging from the built-in solar panel or charging from the hand-crank. Unlike many other radios, you only need about a minute or two of cranking for an hours worth of radio time and 30 minutes of the LED light.

You can also use a standard USB wall charger with micro-USB cable to power the radio and recharge the battery. We like there is a “low-power” mode where the radio basically sleeps until a weather report wakes it up. Midland says the battery will power the ER210 for weeks in standby mode; If you leave it on a sunny window sill, the solar will keep it going nearly indefinitely.

One complaint from other buyers is the replaceable 18650 battery uses a Midland proprietary / custom connector. This means if you want to be able to swap batteries, you’ll need to buy a Midland one for about $5.

The LED flashlight is bright, at 130 Lumens. It also has a low-power / dim mode to conserve battery power or for when you just don’t want so bright a light. The LED lighting serves two other functions: it will flash when an alert comes in, and you can set it to continuous flash a morse-code SOS signal.

Audio is good, with one of the loudest speakers for a portable (it’s over 95 decibels, measured with a sound-meter app on the iPhone). It will definitely get your attention when an alert comes in; at a more reasonable volume, the NOAA information comes in just fine.

However, it’s not the greatest for just listening to music on the FM bands. It would have been nice if there was a Bluetooth connection to allow for an external speaker. Unfortunately, not one of the emergency radios we reviewed had a Bluetooth option. Maybe on a future model. 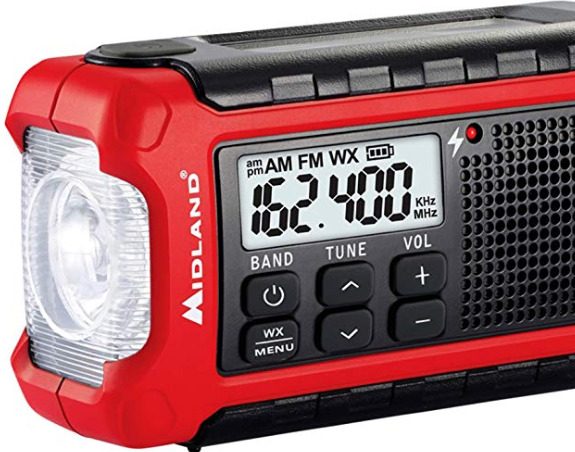 The keypad / buttons are large enough to easily use, and sealed to keep out the water. The LCD screen is easy to read, and has a back-light which automatically shuts off.

It even has a clock function!

When an alert comes in, the ER210’s LED flashes and the siren sounds. Press any button, the radio switches to pre-programmed / default NOAA weather channel to give you the news. If you aren’t around, after 60 seconds the lights and siren turn off, and every 5 seconds the weather memory indicator will flash until you press a button. This way you’ll always know when there is bad weather in your area.

While we didn’t do this test ourselves, other reviews have dropped the radio from about 5 feet to simulate it getting knocked off a shelf or car roof. The reports are favorable, and the durable plastic held up well to this abuse.

At just 9 x 2.75 x 6.5 inches, and 16 ounces, it’s one of the most compact emergency radios around. We really like how portable this radio is – you can even just clip it to your back-pack when out on a hike, or store it in the car glove-box until you need it.

Get more information, or order from Amazon – Midland ER210 .

The Midland ER310 is very similar to the ER210, only it has a bigger battery, brighter light and a few more features for about $10 more (around $60). 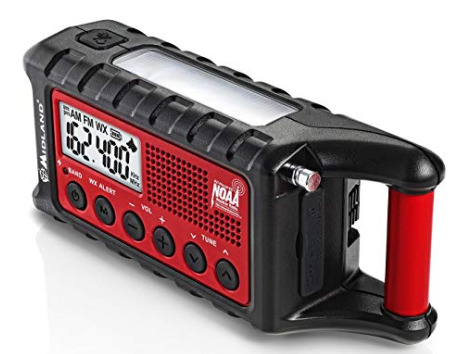 You get the 3-way powering: battery, solar and crank-handle.

The ER310 battery is a 2600mAH Li-Ion, good for about 32 hours of radio. This is about 6 hours more than the ER210. This gives you a lot of time between charges. You can also use 6 standard AA batteries, instead of the Li-Ion, as a back-up.

The downside is that the crank turning doesn’t give you quite as much charging on the ER310 as the ER210. A couple minutes of cranking only gets about 30 minutes of extra charge, less than half what you get with the smaller ER210.

The ER310 has a head-phone jack so you can use wired-earphones or an external wired speaker for the audio.

One additional feature we thought was clever is the ultrasonic dog whistle to help search-and-rescue teams find you.

Get more information, or order from Amazon – Midland ER310 .

The RunningSnail NOAA Weather Radio, about $30, has a lot of nice features. You get the AM, FM and WX bands, which you tune in with dial. We like the analog dial-in, which sometimes makes it easier to get a clear signal. However, this radio doesn’t process the automated weather alerts. 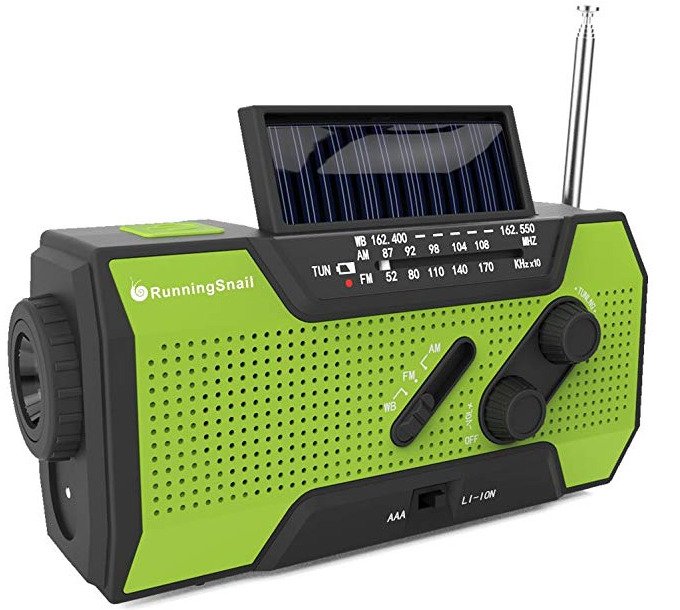 The Li-Ion 2000mAh battery is good for about 4 to 6 hours between charges; And you can also power it with 3 standard AAA batteries. Like all good emergency radios, it has a hand crank to give you about 30 minutes of power after a few minutes of manual cranking.

It also has a solar panel which can be flipped up to best catch the suns rays. We especially like that underneath the panel is an LED light. This is in addition to the 1W, beam adjustable, LED flashlight at the front.

There is also an “SOS” function, where the LED flashlight will strobe Morse-code.

It’s compact at 6.2 x 2.1 x 2.9 inches and 12 ounces, so you can store this in a car or desk drawer until you need it. We like that it comes with a wrist-strap for easy carrying when outdoors.

The Epica Emergency Radio is an affordable alternative at about $22. This lightweight (about 10 ounces) unit includes a 3-band radio (standard AM and FM broadcast frequency plus NOAA VHF weather frequencies), a 3-LED flashlight, mobile phone charger, and 3 ways to charge (crank, solar panel, and plug-in). 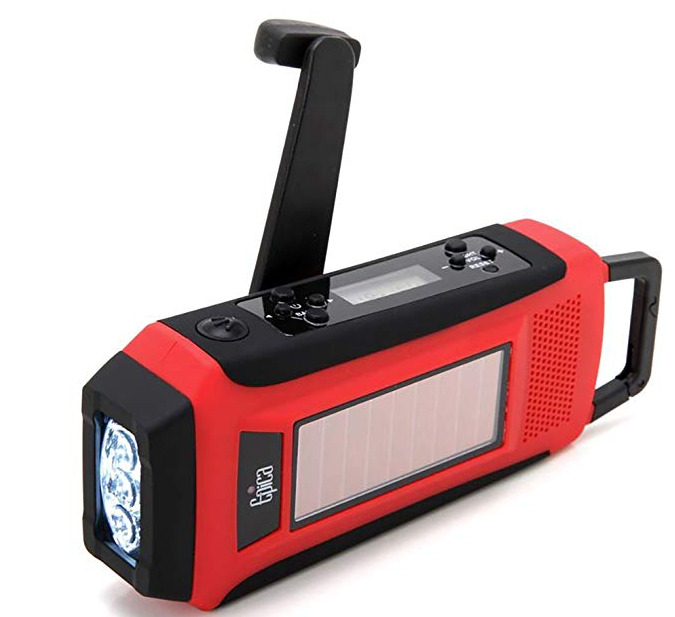 The downside to a low-cost radio is that the plastic casing is not as rugged or as well made as the more expensive radios. Also, you won’t get emergency alert notifications.

We like that the Epica is really compact, at just 5.0 x 1.6 x 2.4 inches and 10 ounces. This is small enough, and inexpensive enough, to include as part of a car, office or home emergency survival kit.

We also like that Epica has a 100% satisfaction guarantee. So if for any reason your Epica product doesn’t make you happy, you’ll receive a full refund or replacement.

The buttons are acceptable, and the hand crank does it’s job. Expect about 30 minutes of radio power for a couple minutes of cranking.

There are many decent emergency alert radios available, and here are a few others that are worth looking into if you either don’t like the ones above or they aren’t available:

What are NOAA / Public Alert?

A quick explanation regarding “NOAA” (National Oceanic and Atmospheric Administration) and “Public Alert”. Both of these provide dedicated weather and emergency radio broadcast alerts, which aren’t available on standard AM/FM radios.

NOAA certified weather radios will be able to tune to the broadcasts on the VHF public service band at these seven frequencies (MHz). The “WX1” through “WX7” are the standard weather band channels for the United States:

Public Alert radios, are a superset of the NOAA features. These let you selectively turn-off non-relevant alerts (like coastal flooding warnings if your live in the mountains, or avalanche warnings if you live at the beach). Most importantly, you can turn-on alerts that are specific to your location and geography.

With a Public Alert radio, you’ll hear a unique tone before an alert. There is also a hardware specification for an output jack to power another notification device, like a strobe light.

What is SAME Technology?

Another feature for NOAA weather radios is support for “Specific Area Message Encoding” (SAME). Similar to the Public Alert, SAME allows the radio to ignore weather alerts that are not for your area. While it may be interesting to know what’s happening in other parts of the country, most people only want to get an emergency alert when it directly affects them.

It’s not just the survivalist or ‘prepper’ that owns an emergency radio. Every home and automobile should have some type of emergency kit just in case, and an emergency radio is a vital piece of equipment to have in that kit. Being prepared and informed can save you and/or your family’s life.

This is especially true if you live in areas (hmm, California??) which have earthquakes, mudslides, wildfires, flash-floods; (uhh, Texas, Louisiana, Florida, Atlantic-Coast) ocean flooding, hurricanes, tornadoes, thunder-storms; (ehh, Utah, Colorado, Nevada, Montana, Dakota’s) avalanches, blizzards. We could go on, but think you get the point – there can be a weather emergency / disaster just about everywhere.

If you are still deciding about getting an emergency radio, just consider these facts from NOAA:

Each year, the United States averages some 10,000 thunderstorms, 5,000 floods, 1,300 tornadoes and 2 Atlantic hurricanes, as well as widespread droughts and wildfires.

Weather, water and climate events, cause an average of approximately 650 deaths and $15 billion in damage per year and are responsible for some 90 percent of all presidentially-declared disasters.

About one-third of the U.S. economy – some $3 trillion – is sensitive to weather and climate.

National Weather Service (NWS) provides weather, hydrologic, and climate forecasts and warnings for the United States, its territories, adjacent waters and ocean areas, for the protection of life and property and the enhancement of the national economy.

What’s your emergency / weather story? Please share in the comments …

Your generous support by using our links for purchases is much appreciated. You may be interested in these Amazon products, or to just start shopping on Amazon - Thank You! *** ***
disasteremergencyER210ER310MidlandNOAAradio
Share FacebookTwitterEmailLinkedin

How to Build an Online Gadget Store

Where to Find America’s Largest Airports

5 Black Friday Must Have Tech Gifts

How to Plan for Your Next Big Vacation