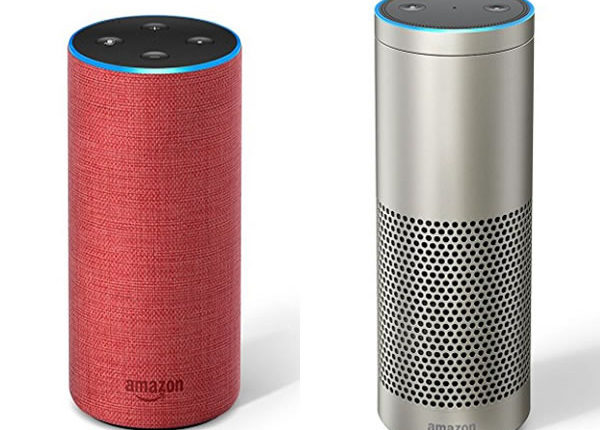 Comparing The Amazon Echo and Echo Plus

In a market where Apple and Google are now making a play for smart speaker dominance, Amazon has raised the bar yet again. At the end of September, the company introduced three new Echo products, including the Amazon Echo Plus

, into the market. Identical to the original Echo

, the Echo Plus is the first direct Echo upgrade. So what’s the difference between them? This article aims to explain.

Amazon introduced a unique product with the Amazon Echo when it first appeared on Amazon’s website in 2014. Wireless speakers already existed but none quite like this. The Echo connects to services such as Audible, Spotify, and Tune-In along with Amazon Music for a voice-controlled audio streaming experience. It also has skills like turning on a flash briefing, ordering an Uber, and ordering from Amazon just to name a few.

It is a tall and cylindrical device with just two buttons on the top and a system of speakers inside. One button wakes Alexa manually and restarts the device if needed. The other mutes the speaker. No other ports exist such as an audio out jack. Instead, it connects to other devices like tablets or computers via Bluetooth.

Another feature that the Amazon Echo offers is control of smart devices inside of the home like lights and thermostats. It is compatible with smart hubs such as:

Individual smart devices like light bulbs, dimmers, switches, locks, outlets, and thermostats are either already compatible with Alexa or require a smart hub to work.

The Amazon Echo Plus

One of the most significant upgrades for the Echo Plus is its built-in smart hub. It can now control any device no matter if it is specifically compatible or if it needs a hub. As with the original, the Echo Plus has all the same features including audio streaming and Alexa skills. It also utilizes the Alexa calling feature by making phone calls and serving as an intercom by dropping in on other people in the home.

The Amazon Echo Plus recognizes voices using far-field voice recognition and a wake word, Alexa or Amazon. In the previous generation, users weren’t always able to have their commands understood, particularly in noisy environments. Amazon has improved this feature and the Echo now understands what you’re asking even when it’s noisy.

The final improvement Amazon made with the Echo Plus is with sound. Echo’s original speakers needed a bit of an improvement. Now the Echo is ready to go with room-filling sound from a 2.5” Dolby speaker system inside. At just $50 more than the 2nd generation Echo, the Echo Plus is worth adding to a home for its smart home capabilities especially for owners of the original Echo.

With the rapid pace of technology development, it’s become commonplace for people to upgrade their devices once a year. Amazon’s approach to the upgrade with Echo Plus is slightly different. While it does offer marked improvements over the original, Amazon’s latest devices are positioned to extend the usefulness of existing devices and encourage new customers to meet Alexa. Take a chance on the Echo Plus or add another to an existing home device.

Ian Andrews has a passion for photography and technology that he discusses on his website IanAndrewsReviews.com. He is also an expert in fraud and scams and is interested in educating the public and businesses about them.

Your generous support by using our links for purchases is much appreciated. You may be interested in these Amazon products, or to just start shopping on Amazon - Thank You! *** ***
AmazonEchoEchoPlus
Share FacebookTwitterEmailLinkedin