Here’s how the Levitating LED Light Bulb from Flyte works – it uses magnets in the wooden base, and in the bottom of the bulb to provide the levitation (remember that magnets of opposite polarity will repel each other). The magnets are arranged in a ring on both the base and the bottom of the bulb. This keeps the bulb centered over the base.

The magnetic rings are also used for the power transfer from the base to the bulb. No, there are no batteries in the bulb. This wireless energy is called “resonant inductive coupling”, or simply inductive power. This is the same method which is used for wireless cell phone charging pads (for more details see – Best 15W Charging Pad ).

Here’s a picture to help understand how everything works: 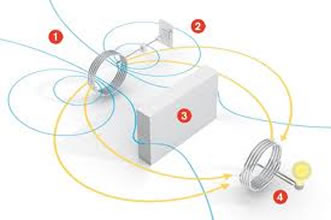 For the Flyte bulb, the transmission ring or coil is made from the circle of magnets in base (1). The electricity going into these magnets comes from plugging the base into a wall outlet (2). Sorry, but it’s not a completely wireless energy system.

Similarly, the magnetic ring in the base of the bulb acts as the receiving coil (4). Passing electricity in the base ring induces an electrical current in the bulb ring. This is what powers the LEDs in the bulb.

Both the base and the bulb housing are made from wood (3). This makes for an attractive piece on your desk, but also allows the magnetic fields to interact, and not restrict the electrical induction. Yes, they could have used plastic, but that wouldn’t be as nice. Metal wouldn’t work for this type of application.

The FLYTE – Buckminister – Original, Authentic Magic Floating Levitating LED Light Bulb Lamp (about $350)  has a tasteful walnut wood base, with a copper cap bulb. The LEDs aren’t too bright at 60 Lumens (compared with about 450 lumens given off by a standard 40W incandescent bulb). But there’s enough light to show this off as an art piece or to start a discussion. And they’ll last for about 50,000 hours (that’s 12 hours a day for about 11 years). 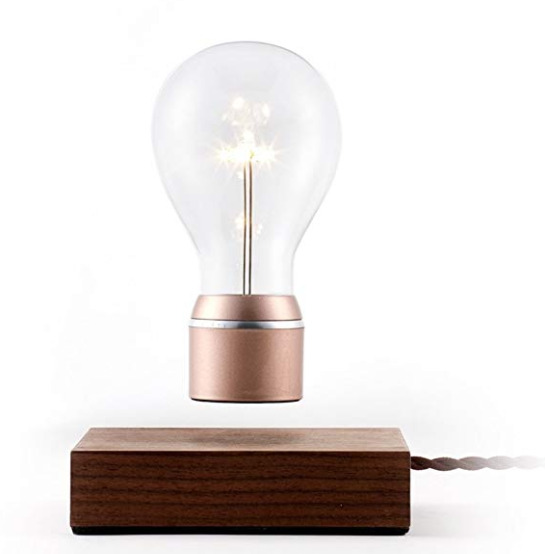 There is a touch activation switch on the corner of the base, so you can turn in on or off with just a tap of your finger. More magic to impress!

The Levitating Light Bulb was thought up by Simon Morris and brought to life by a small team of creatives, engineers, designers and artists who met in Sweden. This started out on Kickstarter, where FLYTE raised more than $600,000 with the help of more than 2,000 backers. They’ve since brought it into full production, and created a line of other levitating objects.

Order one (or more!) from Amazon for about $350 each, Levitating LED Light Bulb from Flyte .

And if you though the Flyte bulb was interesting, you may want to read this article – Is This The Worlds Most Expensive Lightbulb

Your generous support by using our links for purchases is much appreciated. You may be interested in these Amazon products, or to just start shopping on Amazon - Thank You! *** ***
FlyteInductiveLEDLightingWireless Power
Share FacebookTwitterEmailLinkedin

IT Trends for Running a Lab

5 Trends That Will Transform the Digital Workspace in 2022